Here all the info about the process behind the Open ARM project. 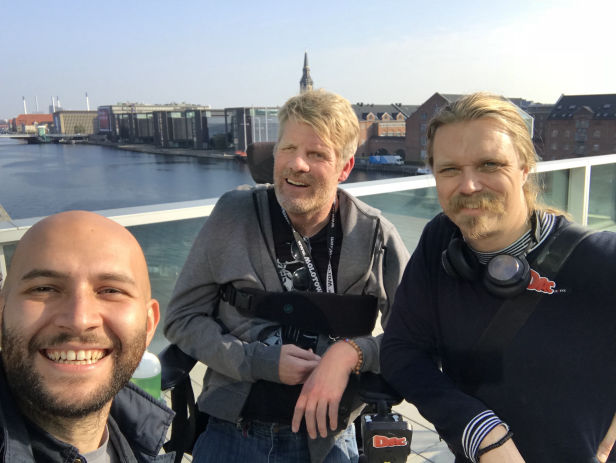 The OpenARM project started as the final project of the Interaction Design Programme at CIID and lasted 10 weeks.

The initial intent of the project was to understand how technology might help people affected by neurodegenerative diseases that lead to physical disabilities.

The reason behind this intent is the belief that design in conjunction with technology can really make the difference in people lives especially for those who are really in need and one of the projects that really inspired me is Not Impossible Labs and their philosophy of Help one. Help many.

So I decided to meet some people affected by these diseases and they have been very open to share with me the joy and pain of their lives. In particular, I met Anders and one of his helpers, Thorbjörn.

Anders was an amazing 49 years old graffiti artist, also known with his tag ZUSA. He has been a pioneer of graffiti in Copenhagen but at the age of 27 he has been diagnosed with Multiple Sclerosis and even if now his body is not strong as in the beginning he is still making graffiti, and they are spread around the world! This happens thanks to his strong will and to the help that people like Thorbjörn and the other helpers give him to produce his graffiti. I really enjoyed some time with them between one prototype iteration and the other. 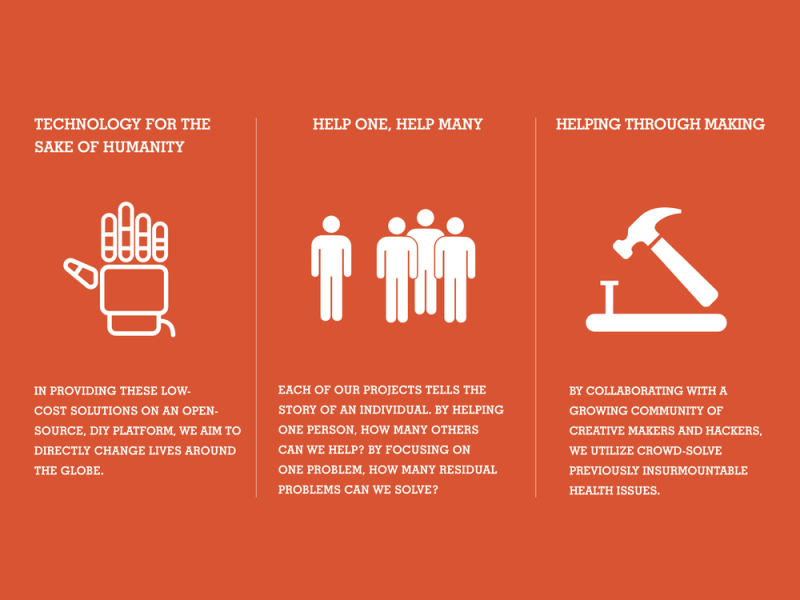 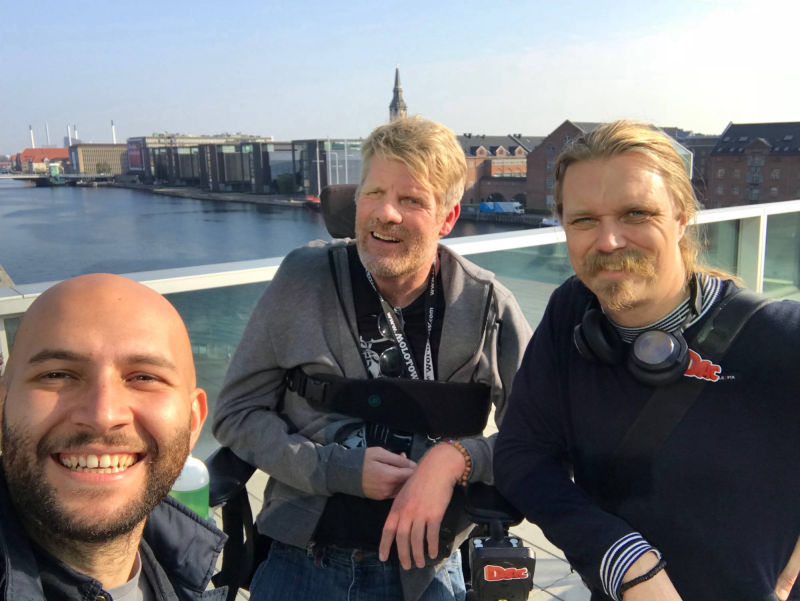 Visit to Danish Architecture Center with Anders and Thorbjörn 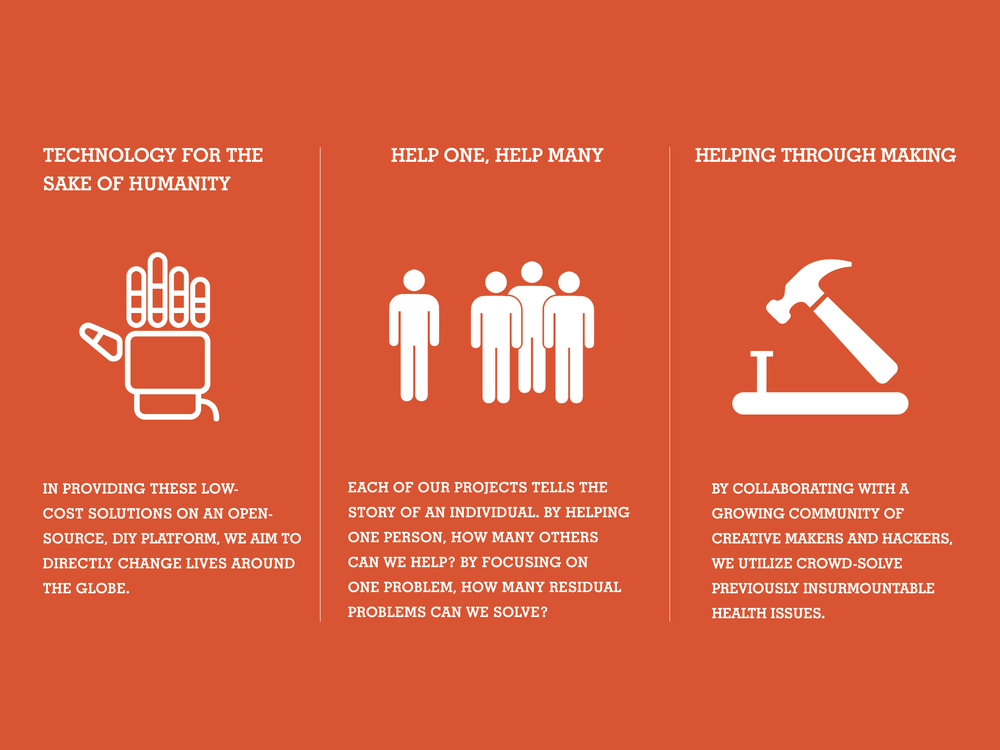 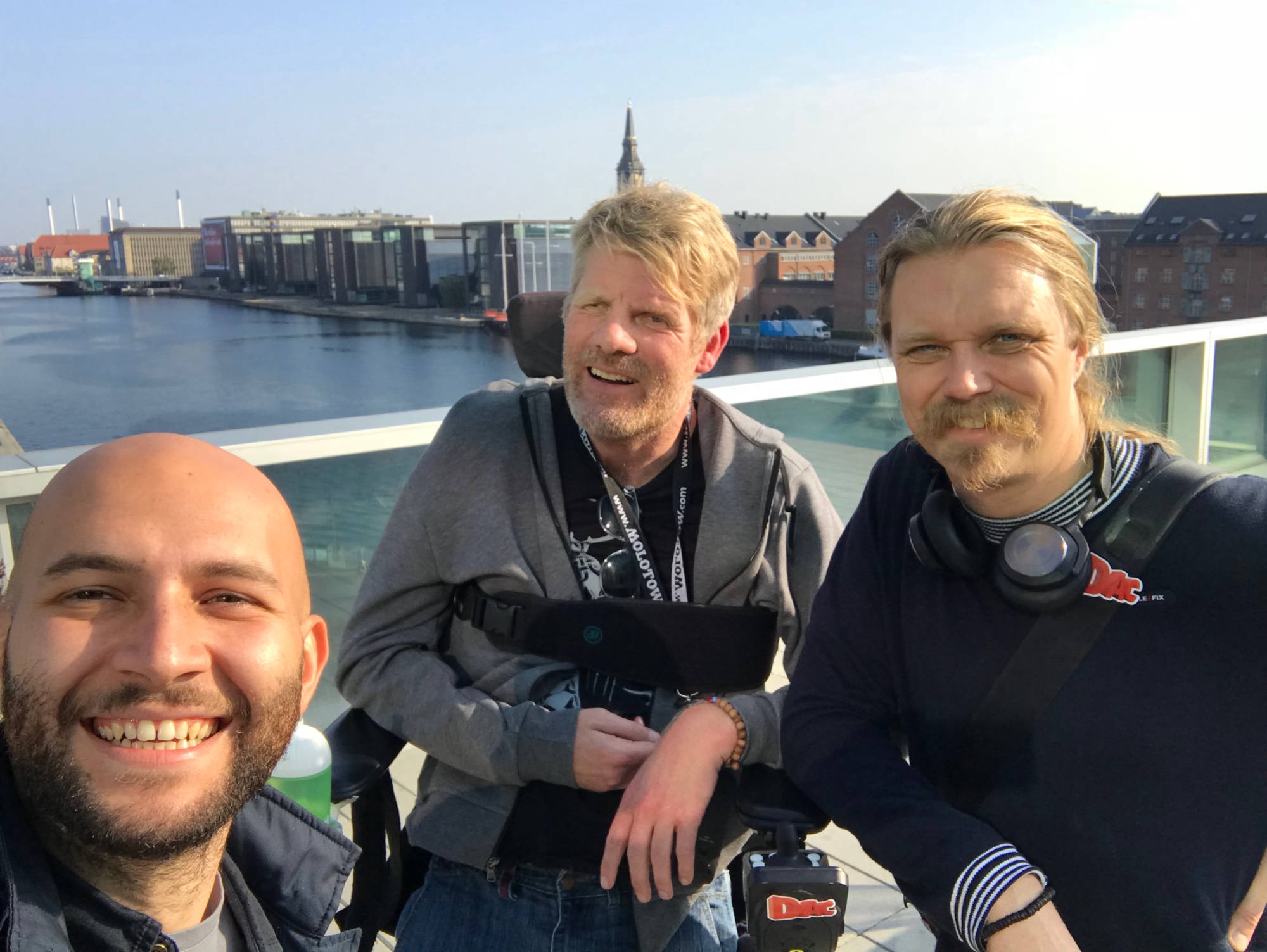 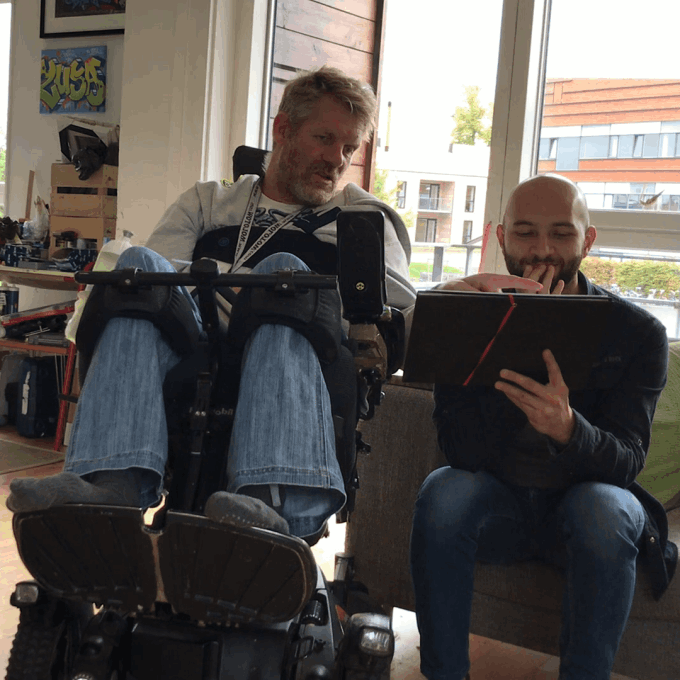 Talking with Anders and Thorbjörn, different areas of intervention came up but one really struck me and it came from Thorbjörn. During the first interview he said he spends half of the day messaging on Anders’ behalf instead of taking care of housework and other errands because Anders, due to the disability lead by the disease he is not able to use modern touch-based devices and typing on computer keyboard is slow and requires a lot of energies for him. This means a lack of freedom as well as privacy for Anders.

So I looked for other ways for people with physical disabilities to use these devices. I found that thanks to the accessibility system embedded into modern devices it is possible to interact with desktop or mobile devices using other controllers and these controllers are already sold on the market but I also found them to be very expensive and not

very customizable from the user. This made me think if it was possible to achieve the same goal using modern technology and the maker philosophy of Do It Yourself that would result in the possibility of building on your own the controller customizing it according to your own abilities and for a fraction of the cost of what is on the market. 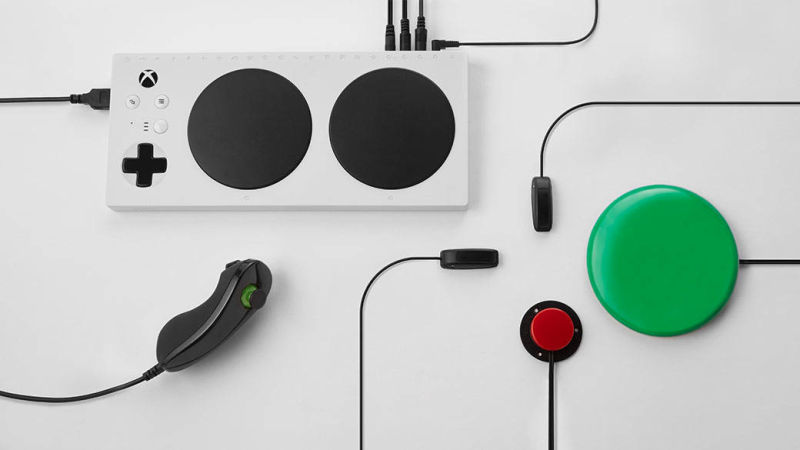 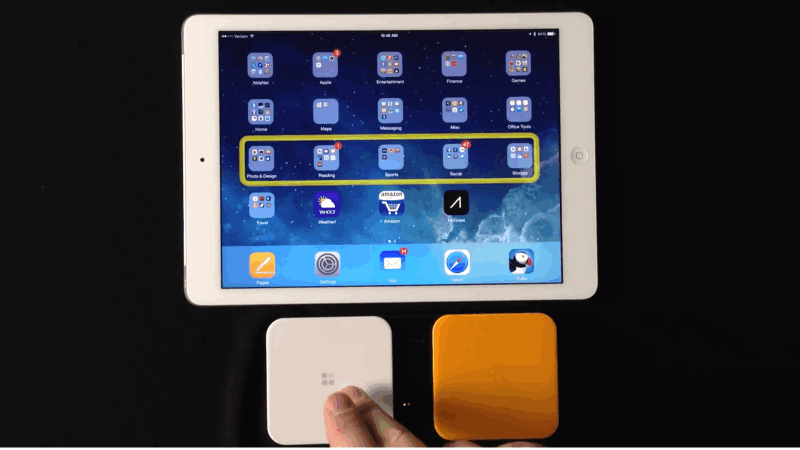 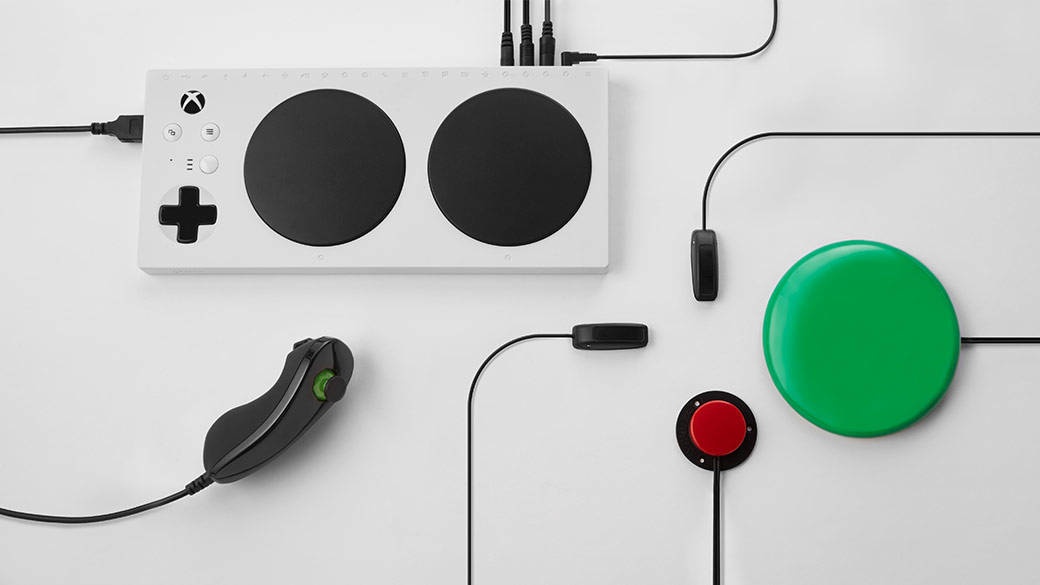 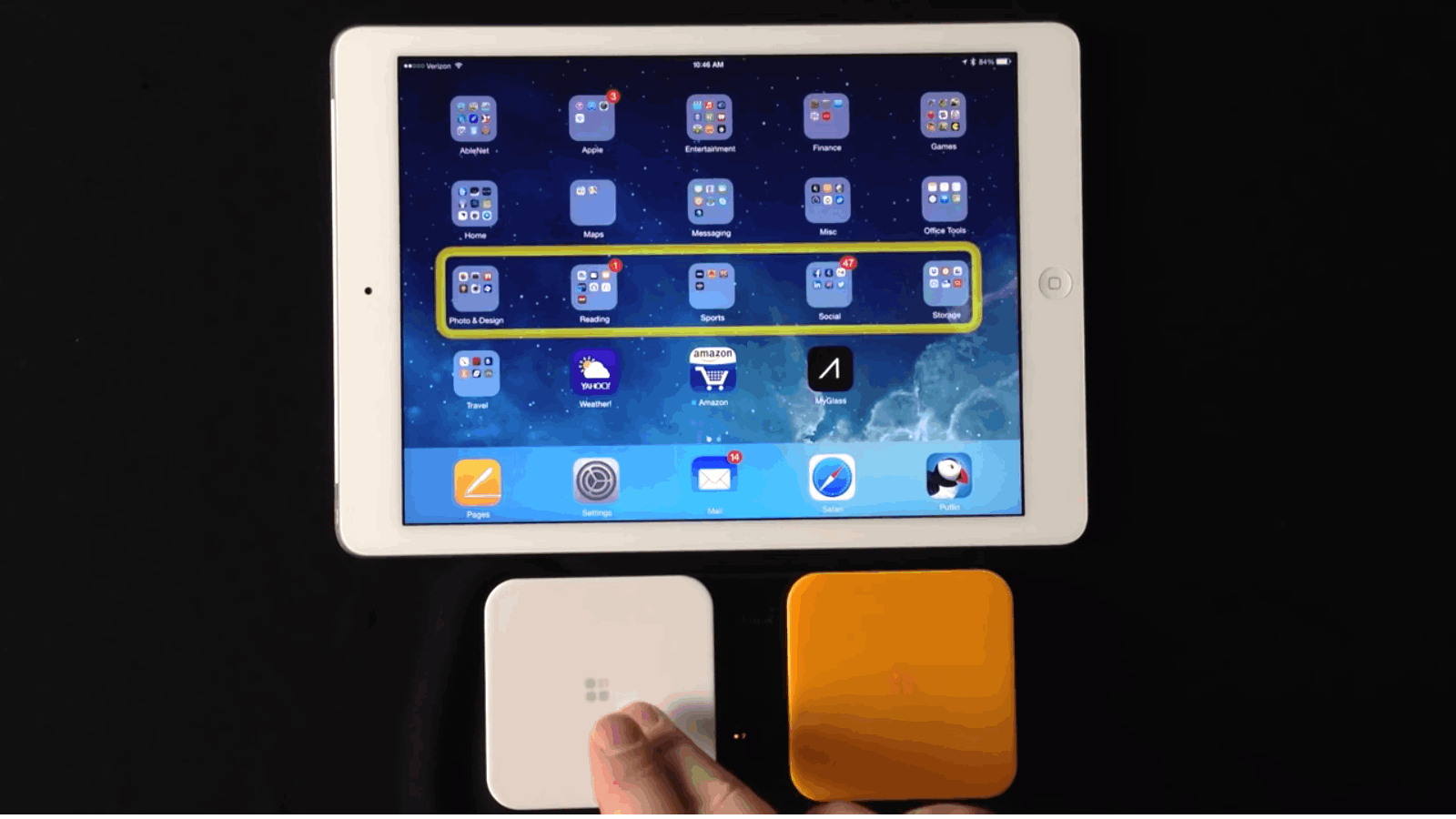 Besides the technology, it was very important to understand which was the best interaction for Anders to control a device given its abilities. The MS affected his speech and the only limb still able to move was the left arm. So I tested with him different iterations of prototypes from a very rough one just to get the main interaction to a working prototype. 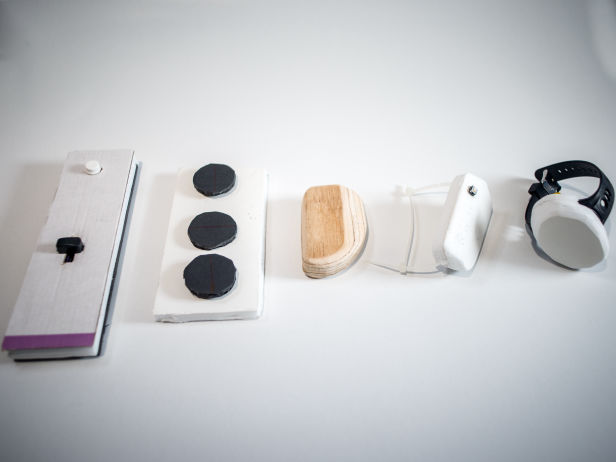 The first iteration was composed of 5 low fidelity prototypes made with wood, cardboard, foamcore, rubber bands and some buttons. The aim of this iteration was to understand what kind of interaction best suit Anders abilities
From left to right:

Button/Lever: a small elastic lever to scan the items back and forth and one button to select the item.

Big Buttons: three big buttons, two to scan the items back and forth and one to select the item.

Handheld: meant to be grabbed with one hand. Five small buttons on the side.

Strapped: similar to the Handheld but with a strap to be tied around the hand.

Wearable: to recognize the gestures of the arm or the hand.

What I got from Anders, trying this prototypes, was that he preferred the big buttons because they where easier to press without being too accurate but also that it was better for him to perform the same gesture over and over again after the first time, this because every new movement requires some time to be thought and transmitted to the arm. Also, he told me that the more buttons the device have the more difficult it is to extricate because it requires more thinking and also because he was more able to use only the thumb and the forefinger. 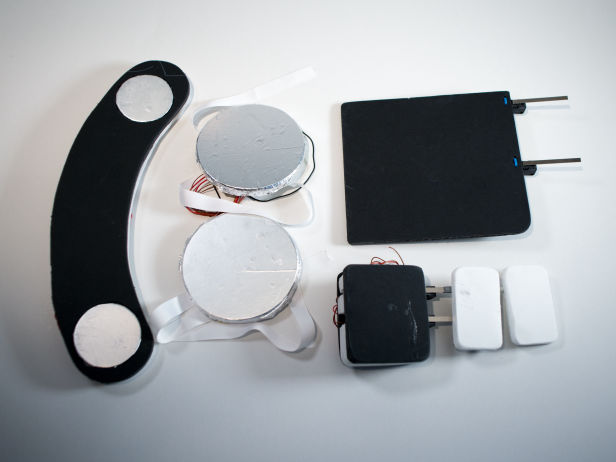 With the learnings from the first iteration in mind I developed some more detailed prototypes to try smaller interactions, to do this I also made them working connected to a small Bluetooth board (Adafruit Feather 32u4 Bluefruit LE ) adapting a simple code taken from the work of Chris Young.
From left to right:

Touch-buttons: one device with two touch buttons which don’t require any pressure.

Strapped: similar to the previous but with two straps to tie the touch buttons around the legs.

Handrest: (top) a big pad to rest the hand on top and use the two lever switches with thumb and forefinger.

Big Buttons: two big buttons that can be easily pressed with the whole

The day of the testing of the second iteration Anders showed me a new controller for his wheelchair. He just got it changed because the previous one was old and damaged. The new one came with Bluetooth and capable of connecting to his android tablet to use the joystick controller as a mouse to move the pointer on the display. What I realized was that there were no better solutions I could ever design for him mainly for two reasons:

the mapping between the joystick and the pointer is completely natural, this lowers incredibly the amount of user's memory to use it; but also Anders was already used to the wheelchair joystick, that means using the same controller for another task would avoid him to learn a new controller.

Still, Anders told me he preferred the Touchbuttons controller.

No lies, this has been a setback for my project, so I started again looking for other people to test with or different solutions. What I found looking on a wonderful facebook community of makers and assistive technologies was some people asking for specific assistive solutions for themselves or their relatives and then some other people, mostly makers, answering them with sort of custom solutions. What I realized was the need for a platform where people in need can ask and those with knowledge can make custom solutions.

Unfortunately, it was late in the project to develop and test a platform but I decided to move a step forward with the controller and from the design to help one I moved the help many.

So the new concept of the controller was split in two parts: the main part, called the brain, where all the computational and communication part happen and a controller connected to the brain, based on the one that Anders highlighted as the best of those we tested. The point of having a modular system is to makes it easier to design new controllers that only need to fit with the main part and to makes the brain compatible with the majority of the adaptive controllers already existing on the market. But also this will makes it easier to upgrade the controller along with the progression of the disease. 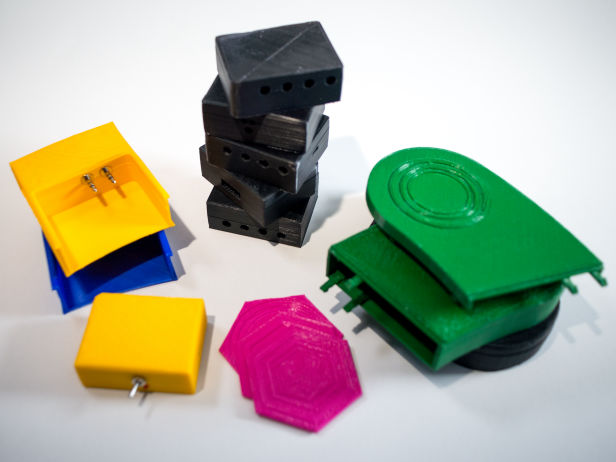 The last iteration of prototyping was more related to the design and manufacturing of the controller. Both the Brain and the Touch Controller have been designed to be 3D printed with the common FDM technology, split into different pieces to fit small printing bed size and to be assembled easily without any other component but just common embedded plastic joints.

The Brain comes with four 3,5 mm audio jack connectors, the standard connection in adaptive devices, and is able to manage up to nine digital inputs, there is a lever switch to switch it on and two LEDs to show the status and feedback, inside there are the Bluetooth board and a LiPo battery to power the circuit. The Touch Controller comes with two capacitive sensors under the surface to sense the touch and two mini vibrating motors to give an haptic feedback, these sensors are connected to the Brain through two 3,5 mm audio jacks.

The 3D printing files, the code and the bill of materials are released on GitHub as open source. 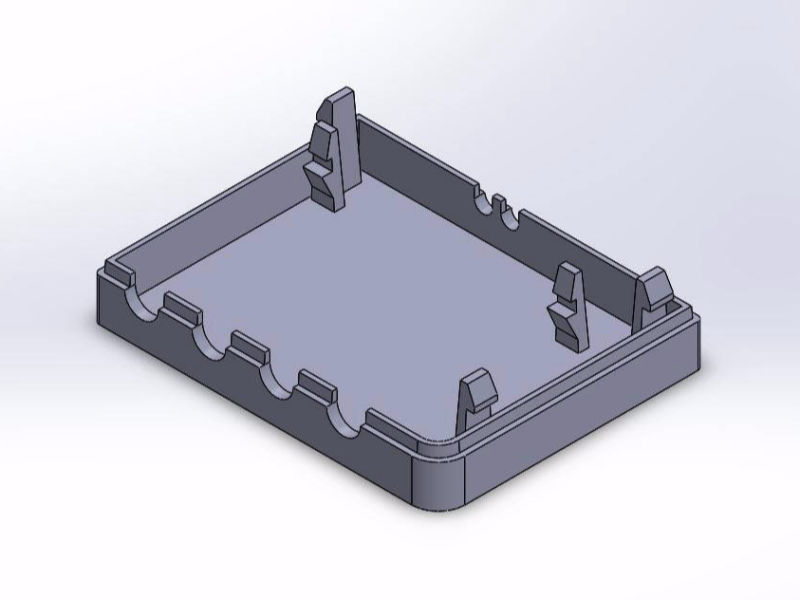 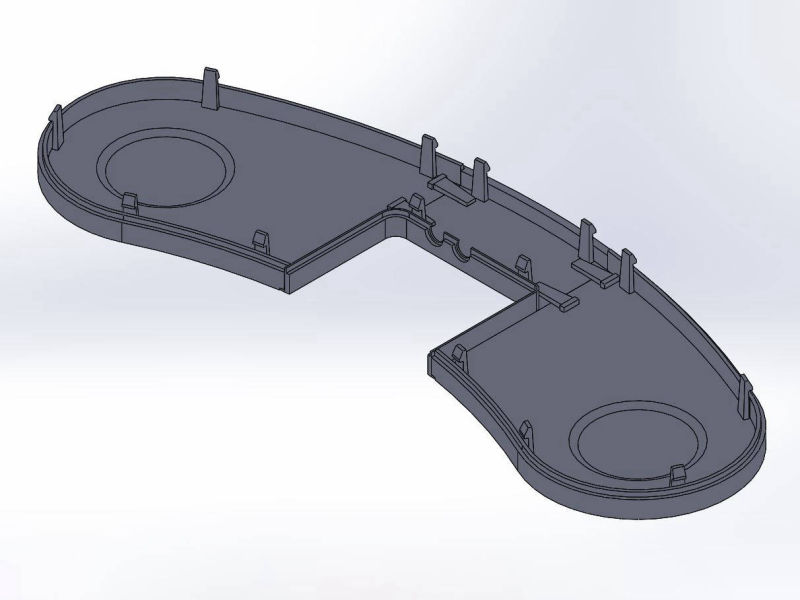 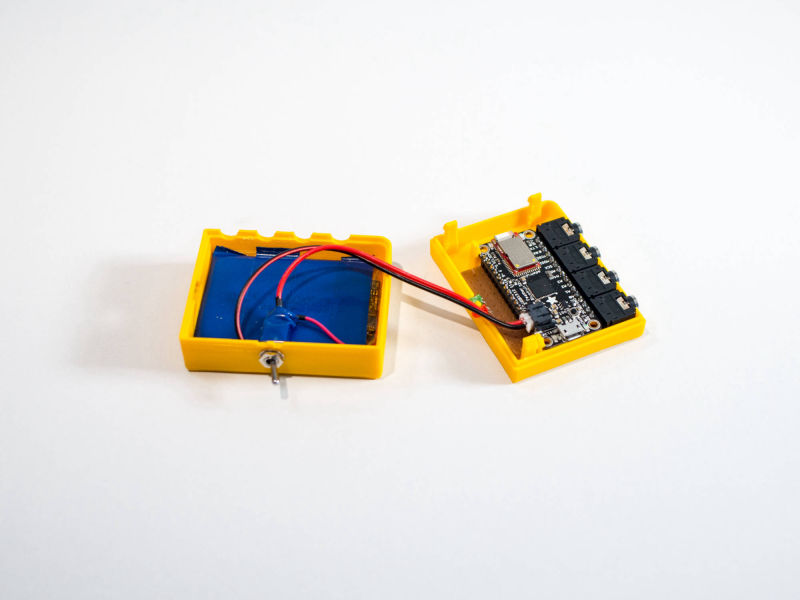 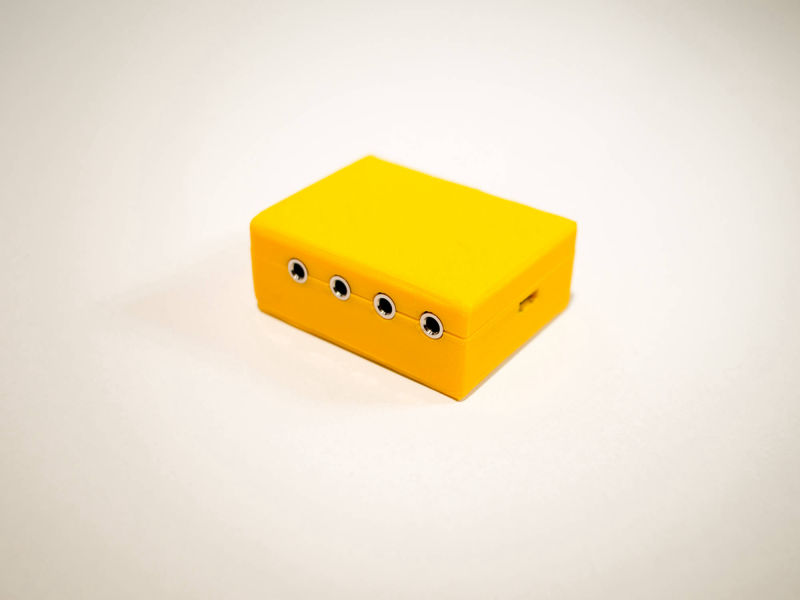 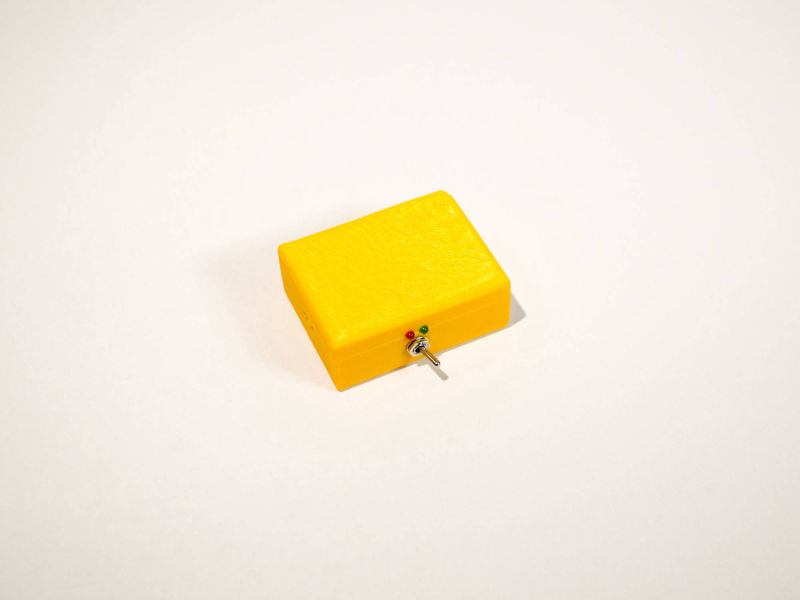 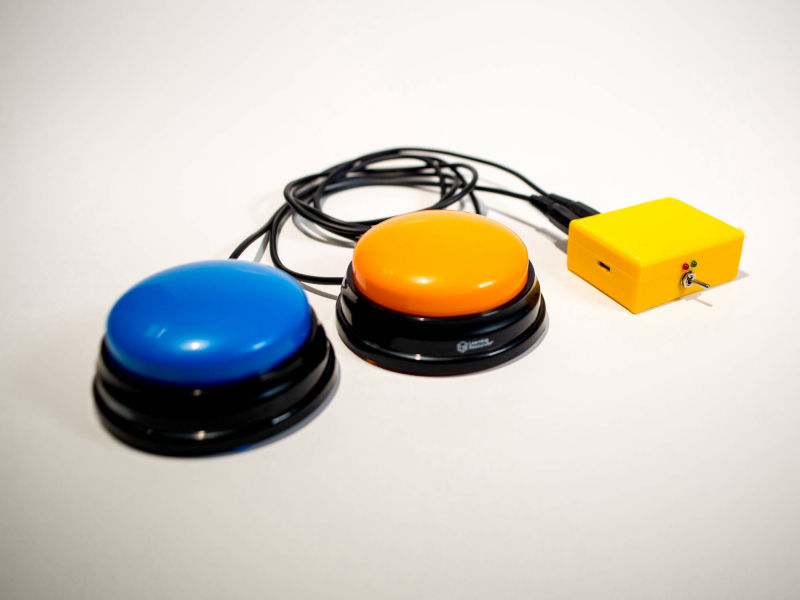 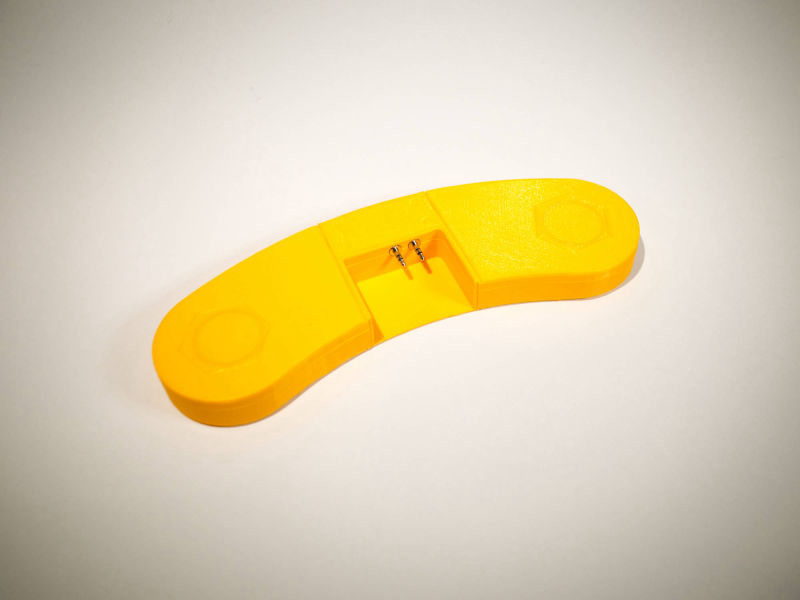 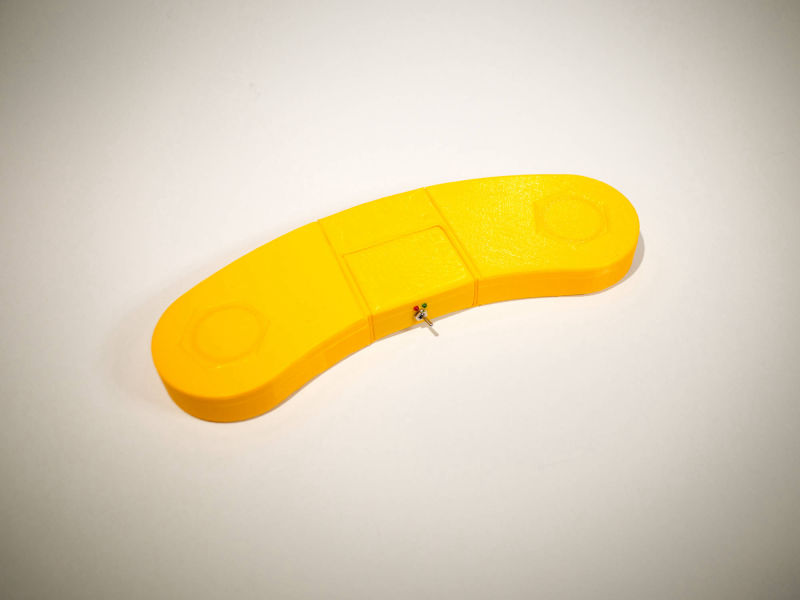 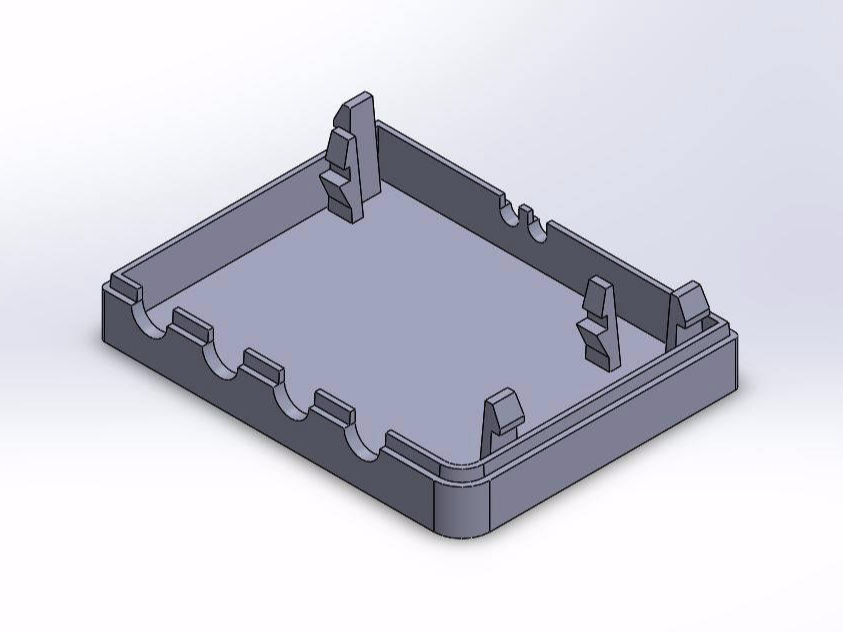 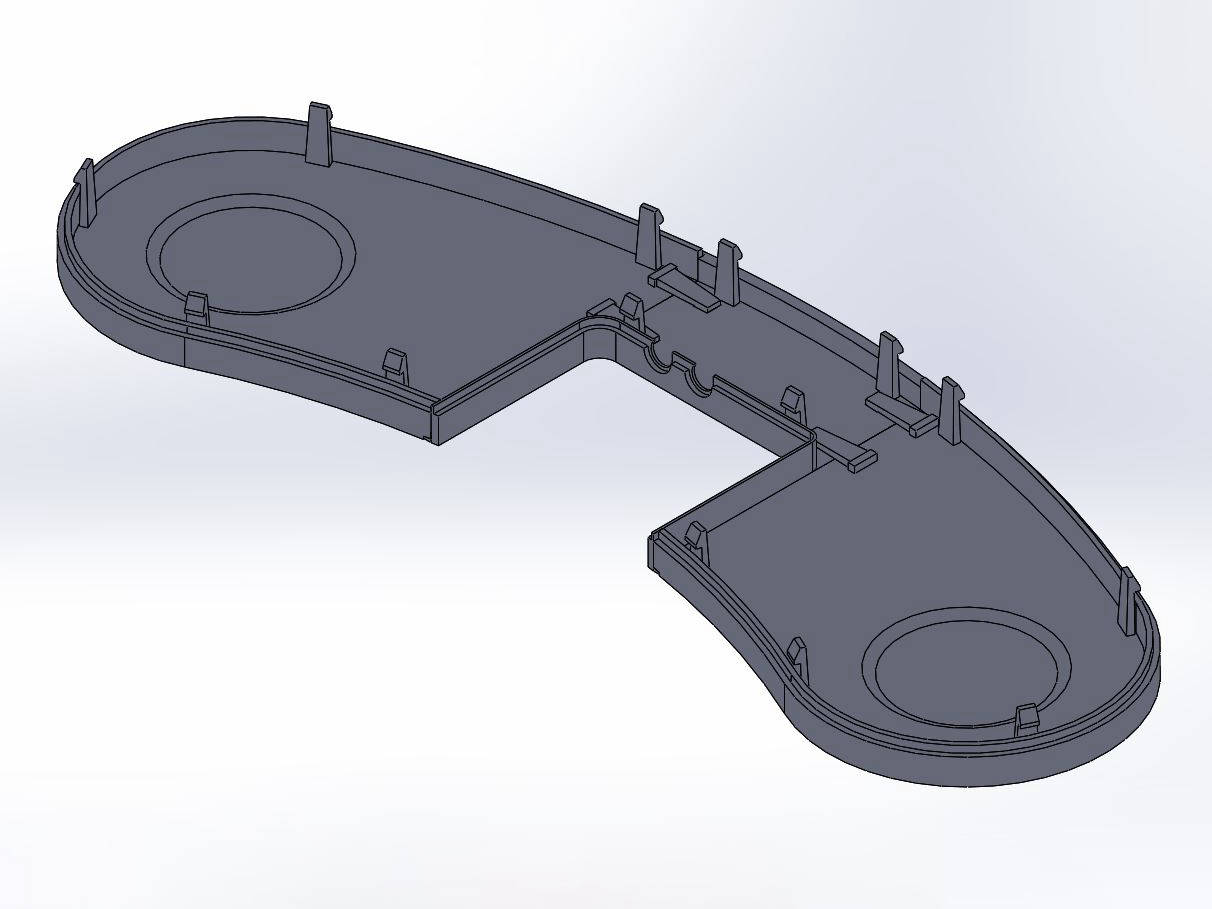 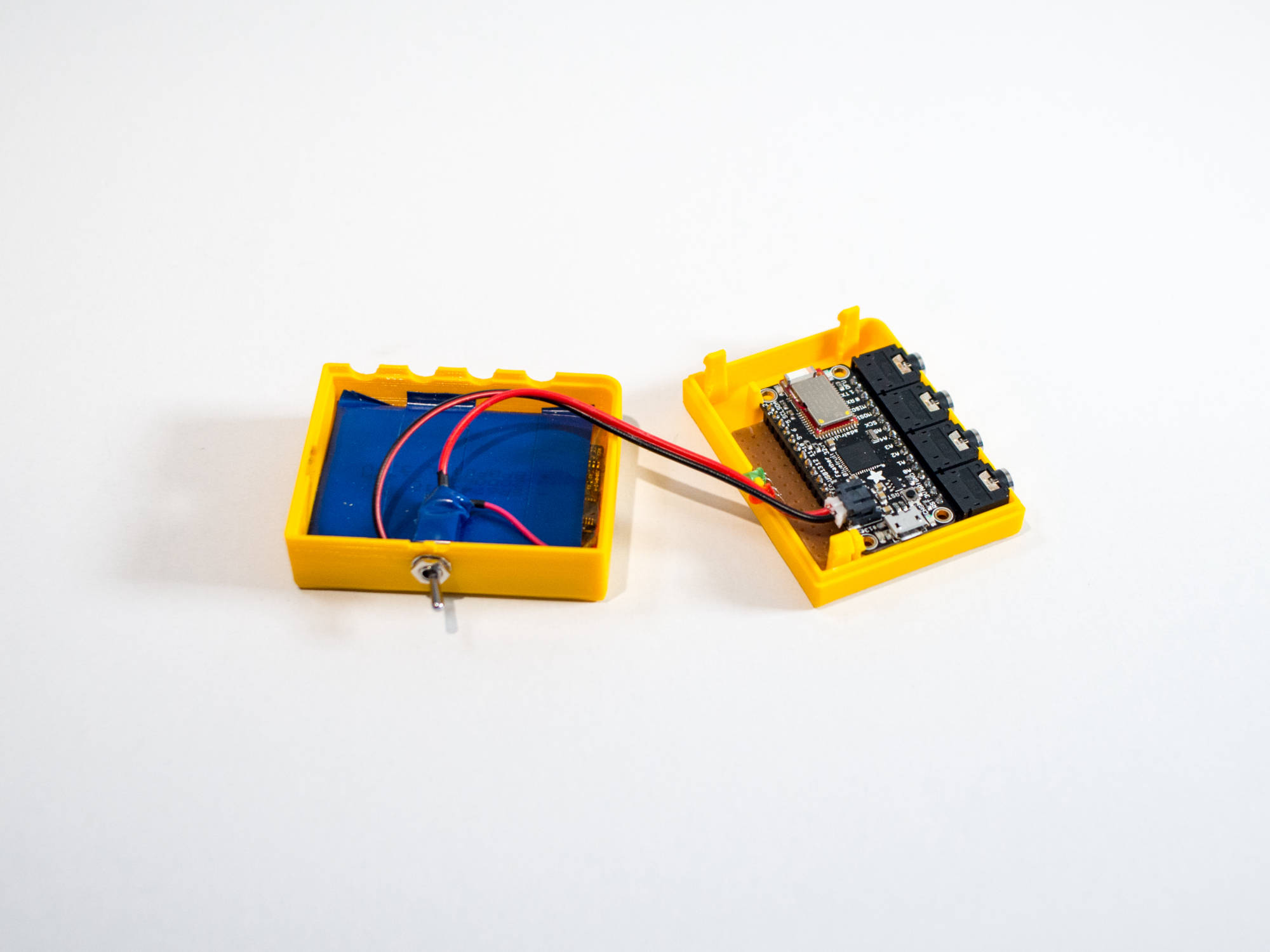 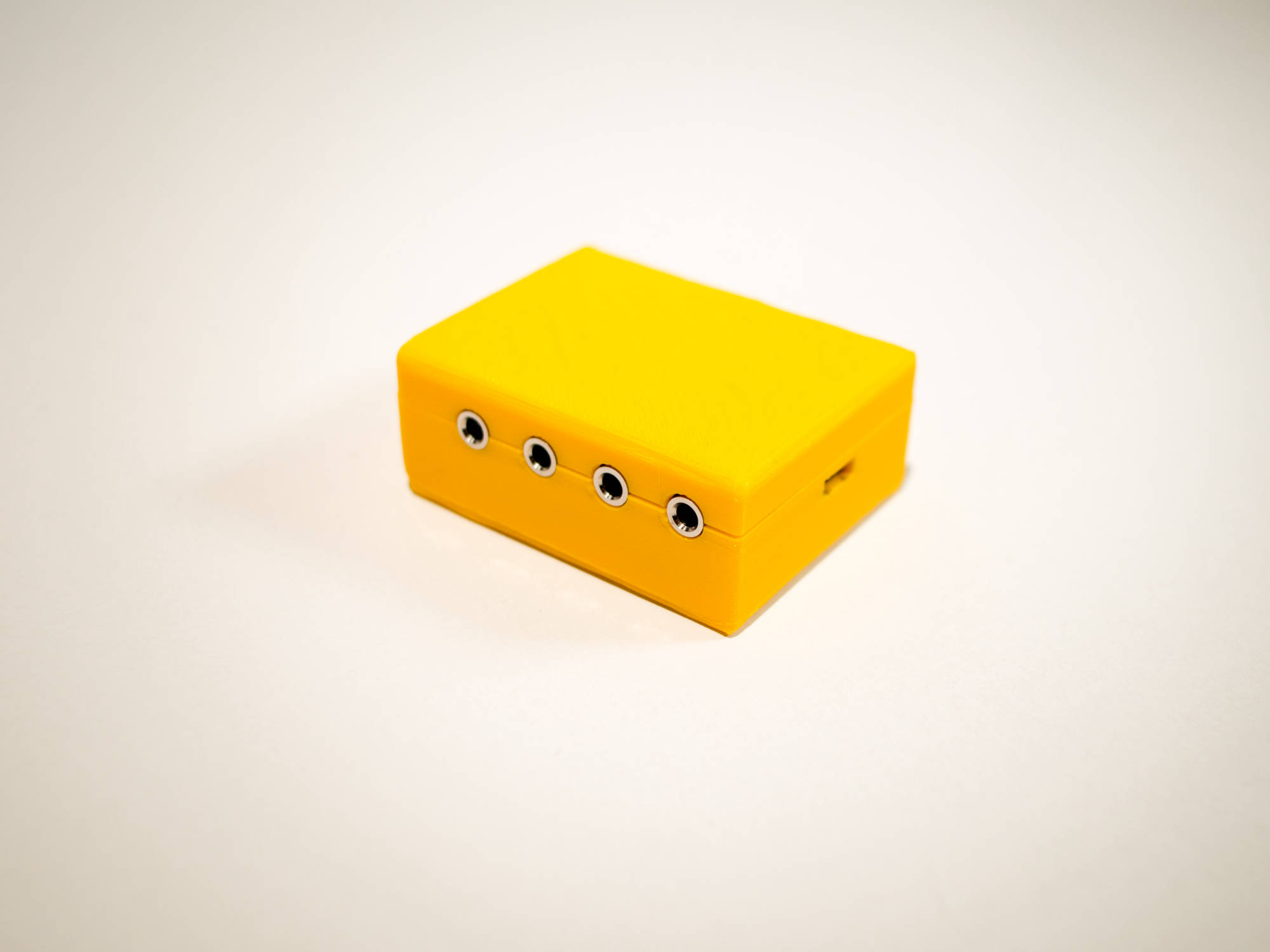 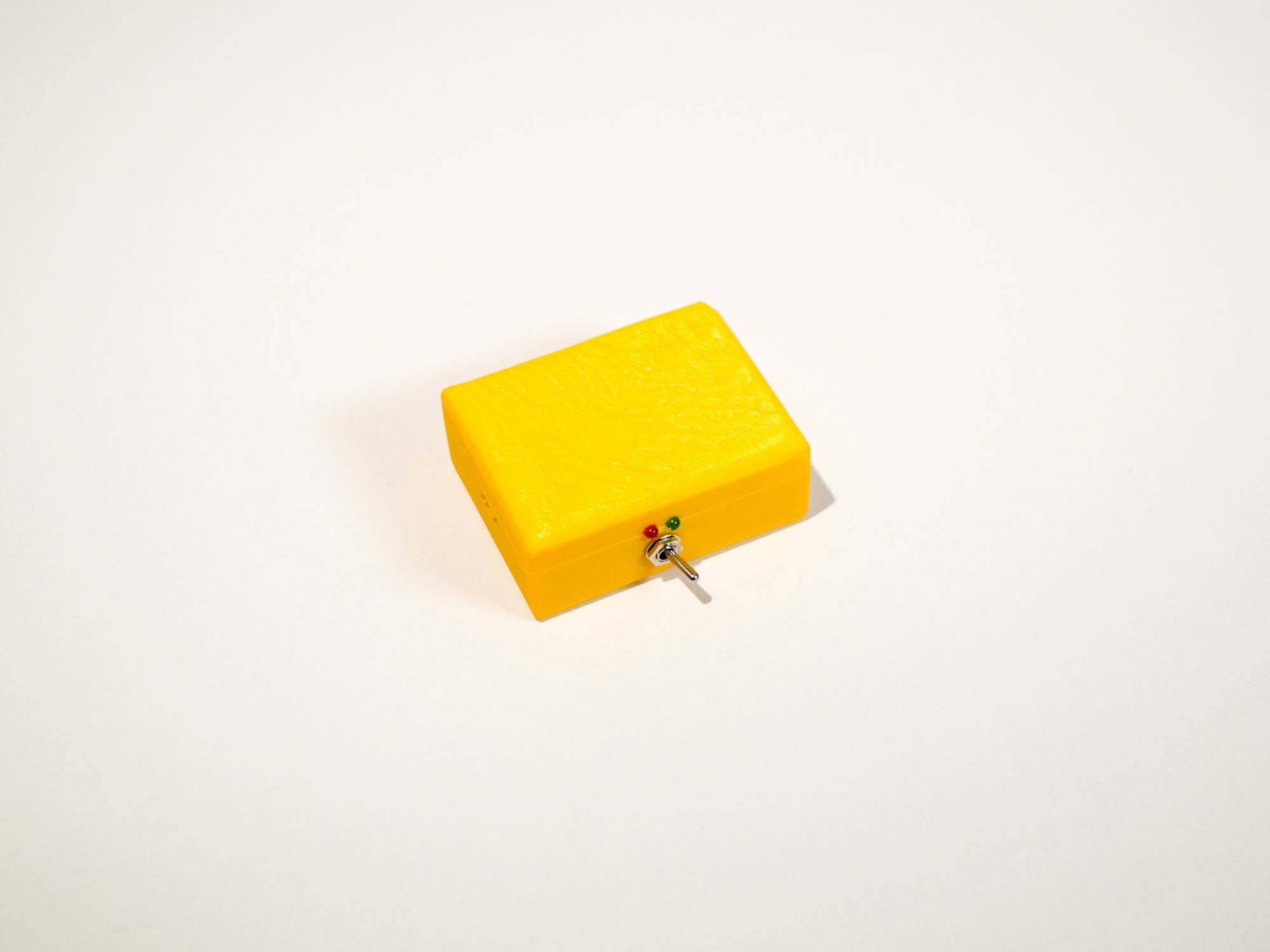 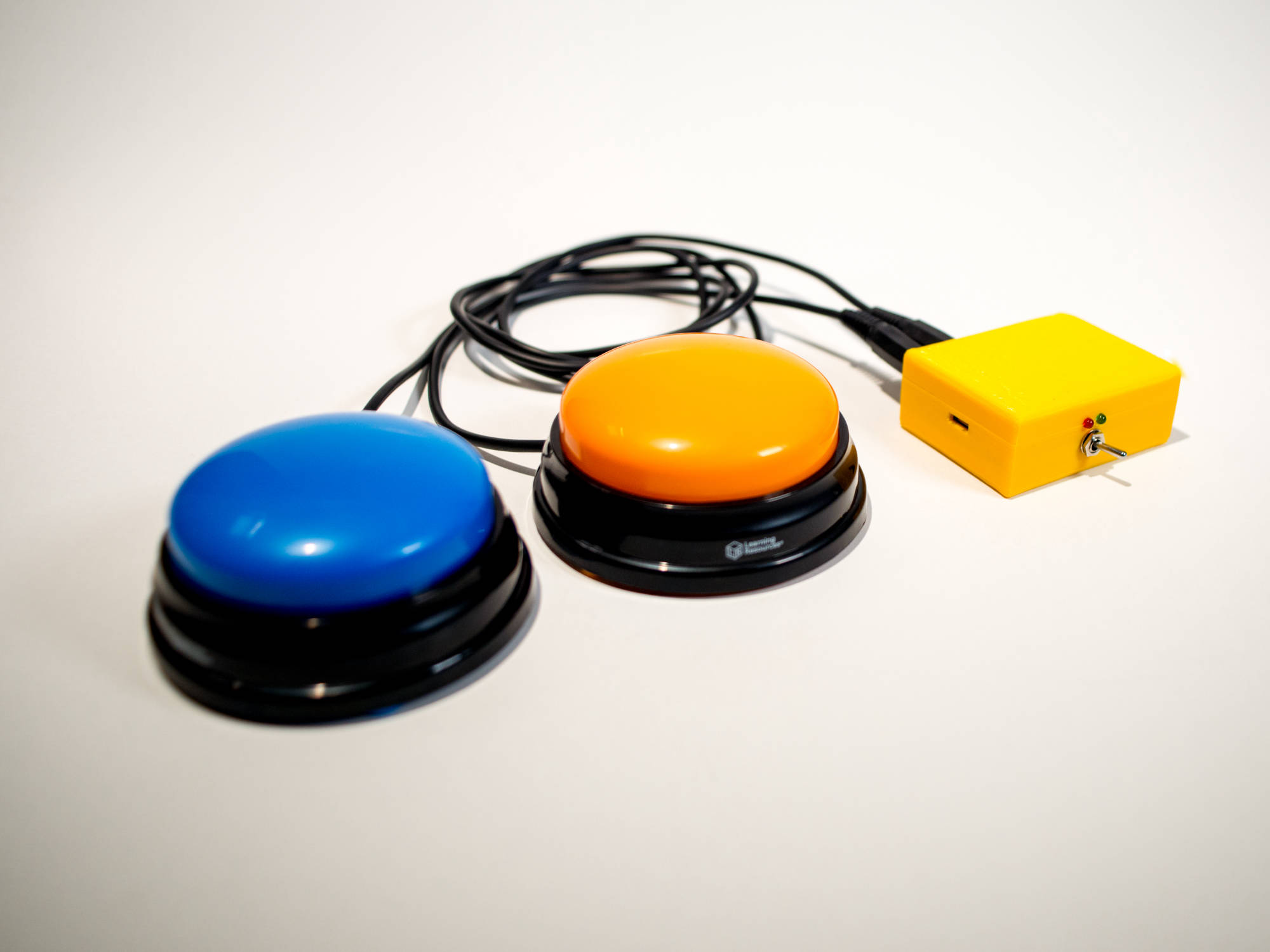 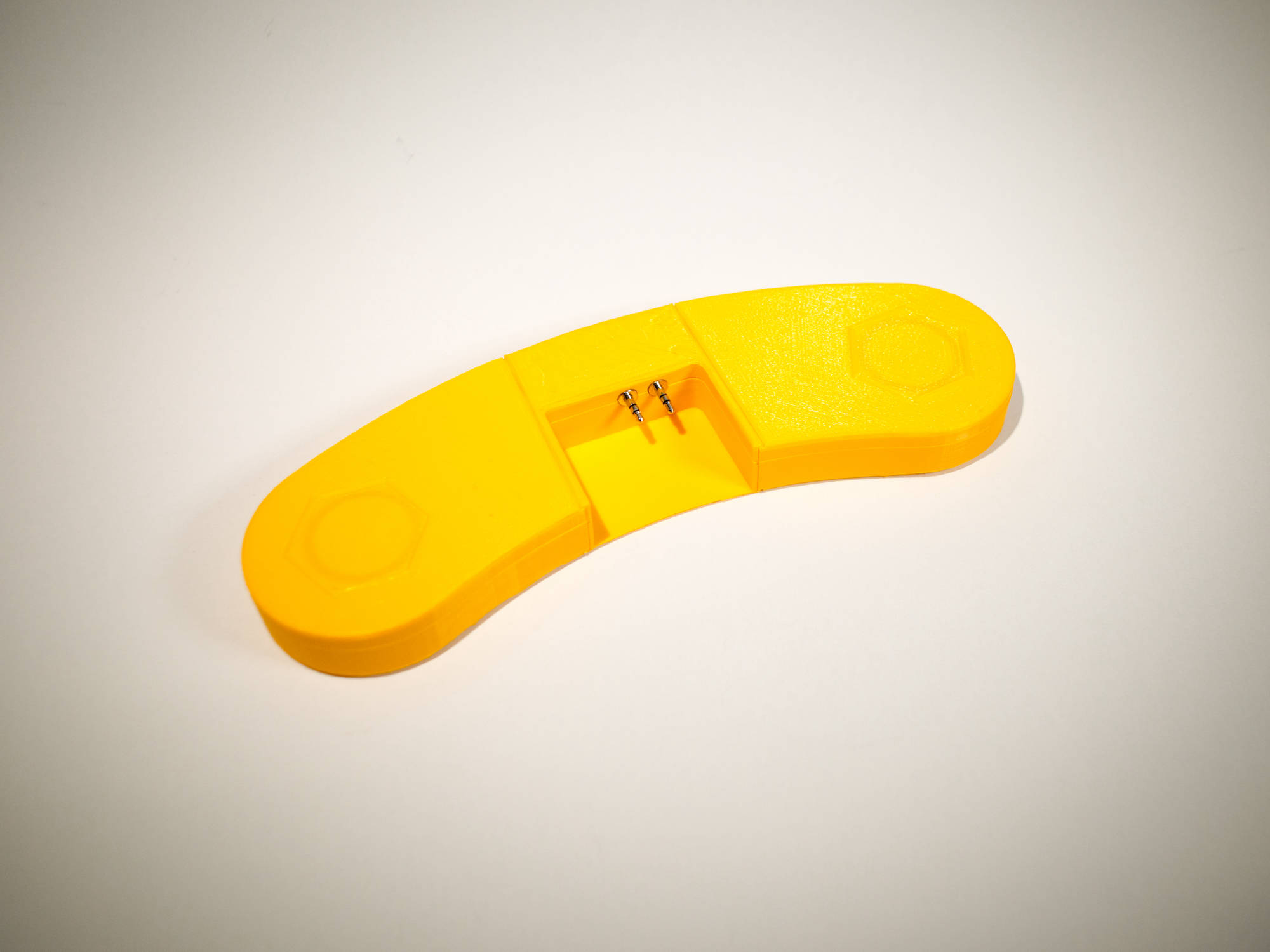 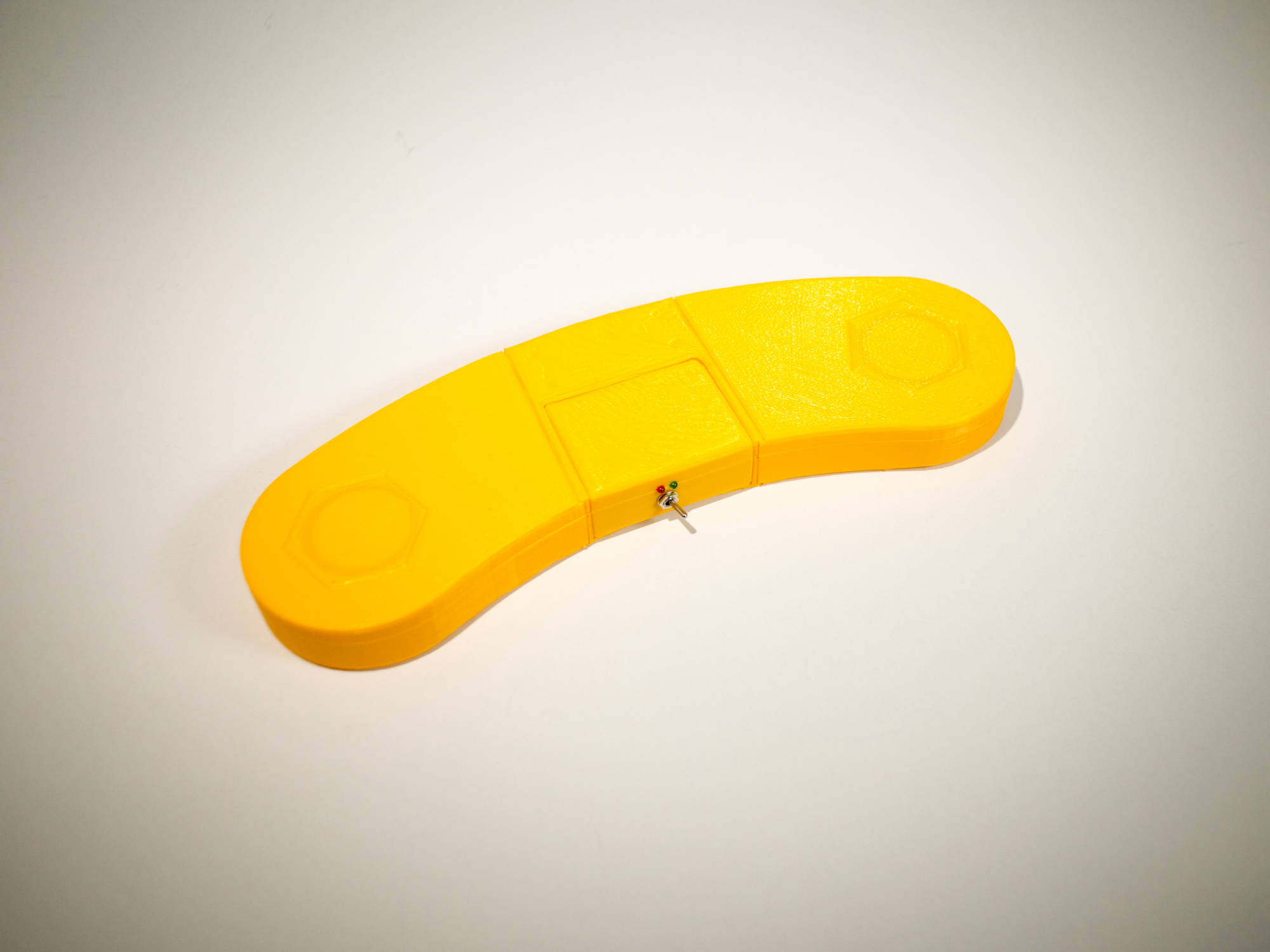 As next steps, I'm planning to conduct more research interviewing not only people with disabilities but also experts to better understand the topic.

Then I'd like to gather more people around the project that would help me to build the whole platform, building new controllers and improving the code.

Also, I would like to start producing ready to assemble kits for those who don't want to deal with 3D printing and coding, selling all the components and providing an app for mobile to customize the behavior of the controller.